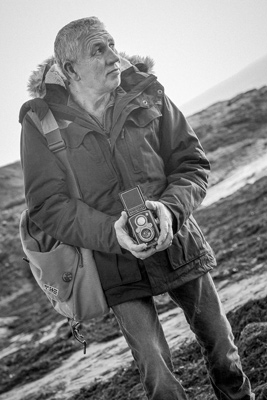 Lives and works in Brittany

Experiencing life
From an early age, Philippe realized that photography would become the best way for him to express his emotions, and chose to blend his life and his passion. His work as a photographer mainly revolves around exploring territories as well as the relationships between individuals and their environment(s). He catches for us glimpses of urban or rural places, mid-way between a documentary and a personal interpretation of space. But he also invites us to discover, through more intimate sets of photos, his efforts to carry across what cannot be touched, memories, dreams and silences, and to turn each photo into a poem. Not to secede from the past, but rather bring it back into the light.

A poetic approach
Black and white or colours ?Square or panoramic formats ? From film to digital photography, it is often the pattern that leads to the choice of the technique used. Separating personal from professional works is no longer an issue for Philippe: all the topics he deals with are for him a new playground, onto which he can experiment his ever evolving photographic « writing » style. Navigating between realism and poetry, beyond appearances, he transposes each subject via a personal narrative style, much more suggestive than descriptive. An attentive and passionate witness, as well as a solitary creator, he likes to work on long-term projects such as books or exhibitions.

Public relations
Thanks to his intimate approach to objects, his permanent quest for perfect light and his strong photographic style, Philippe is regularly sought by public and private companies to work on communication projects.